This biennial weekend-long event, run by the Rotary Club of Kew, is chaired by well known Melbourne landscape architect John Patrick (also a presenter on ABC TV’s Gardening Australia), and encompasses over twenty-five private gardens across Melbourne and surrounding countryside, which have all been professionally designed.

The purpose of the event is to raise the profile of the charities that Rotary supports; fundraise for these charities; and by means of opening these gardens, to encourage creative, bold, versatile and responsible gardening. All funds raised go directly to the nominated charities which have included: Camcare (supporting families under stress), Breast Cancer Network (informing women and men), Alola Foundation (running support programs for women in East Timor), Friedreich Ataxia (supporting research) and Rotary medical and humanitarian projects. 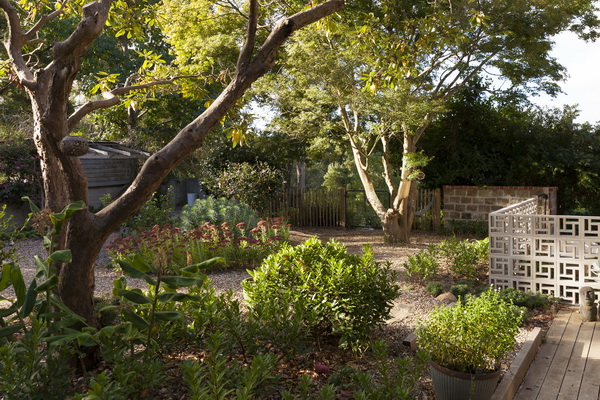 The decorative blockwork, remnant walls of a previous house gave rise to an enclosed, walled garden, creating a whimsical and welcoming entry to a recently renovated country home.

Approaching the house along an established avenue of trees, a sweep of lawn addresses distant views to the sea. The broad deck allows outdoor dining and enjoyment of this open aspect and a view to potential ball games on the lawn.

A line of trees draws the eye and invites visitors through the gate into the walled garden area, where productive and ornamental plants create an enchanting outlook both during the journey into the house, as well as views down from inside the house.

Under the canopy of an old Oak tree, fire pit and strategically placed rock platforms create another seating area. Beyond the walled garden, refurbished buildings and meandering paths create further invitations to wander and explore through copses of fruit, native and exotic trees. Character and whimsy abound with changes of material in the enclosed garden, sculptural elements, found objects, an outdoor bathroom and pathway edging created from repurposed materials. 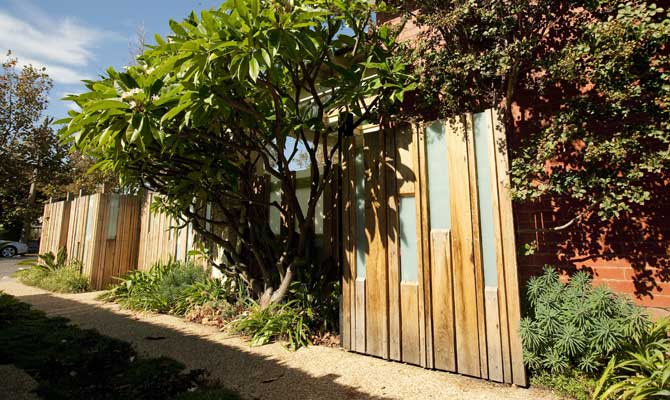 With an art filled, beautifully decorated home reflecting its owners’ keen design eye and eclectic tastes, the garden brief was to extend this distinctive style into the garden. Being plant lovers, but wanting a pool, the owners chose a magnesium filtered pool which enables planting to be right up to the pool’s edge. Here is a garden filled with beautiful, contrasting textures and shapes of plants surrounding and embracing the pool, rather than a pool dominating with plants coming in a distant second.

The striking artistic front fence sets the tone for a distinctly individual front garden. Entry is via an exposed aggregate driveway surrounded by plants on either side and in the central strip. These include a significant sculptural Frangipani and fastigiate Lagerstroemia ‘Tuscarora’ (Crepe Myrtles) as well as Arthropodium cirratum ‘Te Puna’, Hedychium (Ginger Liy), Mackaya bella, Strelitzia reginae (Bird of Paradise) and ground cover of Thymus serpyllum, Trachelospermum asiaticum and Erigeron karvinskianus (Seaside Daisy).

The front gate opens up to reveal a stunning white tiled pool (reflecting the blue of the sky) with intense Moroccan blue wall behind. Strategically placed plants in wrought iron pot holders cover the wall. Walk around the pool on Castlemaine slate random pavers positioned to allow sprawling vegetation between, and stop at areas of crazy paving, for sun lounging and entertaining. A traditional covered front patio is paved in a honed version of the exposed aggregate from the driveway (as is the main front door entry).

The owners can sit on the bench seat at the end of the pool, lounge in the sun on the fence-side, entertain on the terrace or in the shade of the patio. Diffused light comes into the garden through clouded glass panels in the fence, and despite its compact size, the garden offers many options in terms of enjoyment at various times of the day and in different seasons.

Plants used were chosen for their hardy nature and distinctive contrasting forms and textures. These include various Euphorbia, Asparagus densiflorus ‘Myersii’, Magnolia ‘Kay Parris’, Colocasia esculenta, Juniperus sabina, Cyperus papyrus, various sculptural succulents, Brugmansia x candida, Luculia gratissima, Cotinus coggygria, Beschernoria septentrionalis, Bouteloua gracilis, flaxes, Ceratostigma plumbaginoides , Zamia furfuracea, Liriope muscari, and Elletaria cardamomum. Hedging of Myrtus communis and Murraya paniculata will provide a backdrop in time, but kept to a height that ensures the beautiful front fence can be enjoyed. Trachelospermum jasminoides (Star Jasmine) is being trained to climb along the top of this fence. Various pieces such as a steel obelisk, stone pedestal and other sculptural elements populate the garden, in keeping with the eclectic nature of the home itself.

This garden is the conversion of two separate courtyard gardens into one garden space, in adjacent Roy Grounds designed mid-1950s townhouses.  These modernist buildings with double-height windows spanning the width of the house, provide beautiful framing to the garden, which is densely planted and includes established trees, a linking wide set of steps and crazy paved areas.   My first impression on visiting the apartment was the framing of the view provided by the large bank of windows, and the result is a very harmonious, green retreat, enjoyed equally from the inside looking out, as from within the garden itself.

While the lines of the building are very clearly rectilinear, this called for some balance in the garden design, in the form of overlapping circles. Taking inspiration from Grounds’ gold award winning home close by – a square format opening inwards to a circular courtyard – both garden areas are set to a circle within a square. The lower courtyard comprises a swathe of crazy paved terrace continuing the curve of garden bed around a circular lawn and central feature Liriodendron tulipifera.  The upper courtyard also has a central feature tree (Arbutus canariensis) surrounded by a circle of widely-set crazy pavers.  The retaining wall and wide steps between the two areas continue the circular pattern, radiating out from the central tree in the upper courtyard.

The balance of the green circle of lawn in the lower garden, offset by the upper circular crazy paved area planted with sprawling thyme, provides a yin/yang contrast, highlighted by sculptural elements in the garden that in the upper garden are composed of white marble, and in the lower, of black textiles. These sculptures and pieces of furniture are beautifully offset by the surrounding vegetation.

Planting comprises contrasts in texture and form of various shrubs, ground cover and small trees. The Arbutus was chosen as an evergreen specimen tree with ongoing seasonal interest provided by its striking bark and branch structure, its delicate bell-like flowers and strawberry shaped fruit, as well as its handsome serrated leaves. A grove of flowering cherries was a specific client request, providing stunning spring display, and an existing bamboo glade was supplemented by additional clumps to provide elements of repetition in form and height.

A lush yet hardy garden with contrasts in texture, form and colour, highlighted by a sculptural entertaining space.

This was an interesting divergence from other design jobs. Bern, being highly visual and creative, and more hands on, asked me to draw up rough sketches of design intent, and provide a planting guide, but had no need for detailed documentation. Her previous work with gardens and her obviously keen eye meant that I was confident that this more cooperative approach could work. In fact, it has been such a successful collaboration that we hope to work together again.

With a large open gravel area, previously an extensive vegetable patch, and a lovely, but unstructured collection of plants, it became clear that the garden needed some repeated elements to bring it together as a whole, particularly to link front and back gardens.  A renovation next door motivated reconfiguring the garden to utilise the ‘borrowed’ view towards the other neighbour’s elegant, silvery Eucalypt.

The plan was to redirect the view of visitors to the garden, rather than waiting for trees and high fences to partially address the neighbouring house’s bulk.  The garden also needed to be brought across to and integrated with the deck, making a smooth transition between house and garden.  We wanted to close up the gravel area, but it was still required for open space/entertaining, so it needed to be given definition and softened with vegetative surrounds.  Most importantly, the garden needed to be planned with Melbourne’s climate in mind, with hardy and drought tolerant plants, requiring minimal watering in time.

By designing a pair of sculptural L-shaped concrete benches, an entertaining and lounging area was created which placed the visitor facing towards the lush citrus grove and beyond to the neighbouring Eucalypt.  The concrete of the benches worked well to link the existing section of rendered wall beside the deck, and a low wall/bench beside the lemon tree, as well as highlighting the grey tones provided by various plants.

Plants were carefully placed to balance form, colour and textural contrast.  Silvery grey tones in the Plectranthus, Cotyledon, Santolina and Leucophyta were used to bring the borrowed view of the silver/grey trunk of the Eucalypt down to link at ground level.   Correa baeuerlenii contrasts beautifully with Acacia cognata, and Caryopteris shines in contrast with the surrounding Leucophyta and Senecio.  There are repeated elements of form in the upward thrust of Phormium, Agave and Aloe providing definition, as with the rounded mounds of various low shrubs, and the sprawling ground cover of prostrate Rosemary and Myoporum parvifolium.

In the front garden, there was a pond which had been overtaken by reeds. The pond was cleared and the fine, feathery form of Cyperus papyrus was used instead, providing a similar light texture and colour to a grove of Ginkgo. These trees were relocated from the rear garden to a more sheltered position near the pond.  Some of the Cordylines at the front were removed, allowing the few remaining to provide height and definition to the front entry.  Underplanting was done with similar ground cover and shrubby plants to the rear garden to provide rhythm and repetition of form and texture.